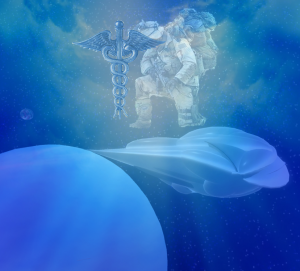 The orbital lighter shuddered as it entered the atmosphere. Outside the clear steel windows the sky slowly changed from the black of space to the clear blue of a spring afternoon. Banking sharply on approach the ship set down at the LaGuardia spaceport. A stream of people emerged from the passenger tunnel jostling each other as they made their way through the terminal. Uninterested in fighting the crowd, a man in a crisp blue and scarlet uniform waited for the press to thin-out before following.

Tall and straight-backed, he moved with a slight hitch in his step. The pink of freshly healing scars marred his face. Small duffle bag slung over one shoulder, the Guardian-sergeant exited the terminal.

Smiling, he closed his eyes, took in a deep breath. Thank God for fresh unfiltered, non-recycled air, he thought, as he delighted in the taste and smell of it. It’s good to be home again. He moved away from the sliding glass doors.

“No thanks,” he said, waving away the driver of the aircab. He pondered his options, and settled on a ground taxi.

The gentle motions of the cab let him relax. His thoughts drifted back to Avalon. Disjointed images and feelings flooded his mind; running from cover to cover, rocket assisted projectiles shrieking by only to explode against something— or someone, followed by the screams of the wounded. He shuddered at the memory of the tremendous explosion that had killed so many, at the pain and fear, then and now. The view of Tim’s face looking down, his voice calm as he dragged them both to safety.

He swallowed the growing lump in his throat and had the cabbie drop him off a few blocks from the hospital. He decided he could use the walk to clear his head.

Plague hospitals tended to be in the worst part of town. Most citizens still feared Shrivelers, even after the infectious stage. Only now was the word getting out that it was safe for loved ones to visit them again— before they died.

The sun was going down and the streets were almost deserted. Rounding a corner he caught sight of a knot of people. One fellow, a street punk by the look of him, kicked a man repeatedly while he lay on the ground. Two others forcefully dragged a woman into an alley while a pair of children huddled against a nearby wall crying.

“Hey!” he yelled, hand flashing to his holster.

The attackers were the only ones standing, but he still aimed carefully then fired. Without any cover he shuffled his feet, displacing left away from the wall and fired again and then again. The tell-tale scream of his military-grade RAP rounds echoed off the buildings before they tore into their targets. The thugs died quickly, it didn’t take long for an unarmored person to bleed out after being hit by one of the explosive-tipped projectiles. Good thing for the family he was required to carry his side-arm when off duty.

“Relax, it’s all over, you’re okay,” he said, helping up the husband. His face was bleeding from where one of the muggers had struck him with a pistol.

Arms wrapped tightly to his sides and moving gingerly from the pain the man knelt down by his wife. A bruise was already darkening over her eye and one of her sleeves was partly torn away. She sat in stunned, disheveled silence, as her children tumbled into her lap crying uncontrollably. The Guardian stared at her. Beneath the bruising and the tears, there was something familiar about the woman.

He holstered his weapon and waited as the police sirens grew louder. Knowing how long this could take, he gave his name and statement, and then explained to the lieutenant where he was going— and why. The family, still in stunned shock corroborated his account, and with a word of thanks from the lieutenant he was sent on his way.

The familiar wave of post-action fatigue rolled over him. A thought came to him as he walked, the family had not thanked him, and for a moment he resented it. He smiled to himself understanding, civilians weren’t geared to deal with the kind of sharp, violent action they had been through. They are alive and that was enough.

Numbly he entered the hospital and made his way to the correct ward. A weary looking nurse in purple scrubs sat hunched at the nurse’s station doing paperwork. Her face lit up at the sight of him.

“There you are we’ve been waiting for you. When did you get back? It doesn’t matter, come with me.”

His eyebrows rose. “I’ve only just returned from off world. I’m sorry, but do I know you?”

The nurse guided him into a room. On the bed was the plague wracked body of an old woman. Her shallow breath rasped in her throat. The nurse leaned in close and laid her hand gently on the woman’s shoulder.

“Your son’s here,” she whispered.

The woman’s eyes dulled by pain and sedation fluttered opened. Brittle grey hair framed a skeletal face vaguely resembling someone he knew. He opened his mouth to say something. A thin shaking hand reached towards him. His strong calloused fingers tenderly wrapped her slender, bony ones. The lump forming in this throat stopped his words.

The nurse brought him a chair. He sat under the florescent lights, ignoring the noises of the hospital and focused his attention on the dying woman. Frequently the nurse would come in to check her vitals. Occasionally she suggested that he take a break, eat something or rest awhile. He politely refused each time. He simply sat there tenderly stroking the trembling hand and praying quietly. The dying woman never acknowledged a word he spoke, but there was a desperate quality to the way she clung to his hand.

Sometime later he went to find the nurse and tell her the old woman was gone.

He excused himself while the nurse went about her tasks. Stepping from the restroom he ran into the family he had saved earlier.

“Ah, I see you found each other,” the nurse said, interrupting their reunion.

“How is she today?” the wife asked urgently.

“I’m sorry to have to tell you this, but your mother has passed away.”

Tears welled in the woman’s red-rimmed eyes. “So, she died alone then?” She breathed the question softly; as if she did not want the answer she feared getting.

“No. Your brother was with her.”

Pointing at the Guardian, the nurse said, “Isn’t he your brother?”

“Uh– no, he saved our lives earlier, but— no. I’ve never seen him before today.”

“She wasn’t your mother?” she asked the Guardian. “No,” he replied, shaking his head.

“Why didn’t you say something when I first brought you in?”

“I knew you had made a mistake, but— I could tell she was dying. I couldn’t leave her, not then. She needed someone more than I needed to be on my way.” He felt his eyes taking on that faraway look of remembrance. “I’ve had the misfortune of seeing lots of people die. No one should have to die alone.”

“Thank you so much— for everything you’ve done for us,” the wife said her voice thick with emotion. “We could never hope to repay you for the kindness you have shown.”

Tears welling in her eyes, the wife clung to her husband with the one arm and clamped a hand over her mouth, stifling a sob. Suddenly she threw her arms around him and kissed his cheek. The warm lingering wetness of her tears brought the lump back into his throat.

“I don’t mean to be rude, but why are you here?” the nurse asked.

“My friend’s mother is a patient here.” He owed them more of an explanation. “He was killed in the assault on Avalon. He died saving my life. I promised him I would tell his family what happened.”

The nurse nodded. “What’s her name? I’ll take you there myself,” said the nurse.

Without warning the wife’s knees buckled and she collapsed to the floor, still partially cradled in her husband’s arms.

She looked deeply into his eyes. “Martha James is my mother’s name.”

How could he have missed it, they all had Tim’s eyes. 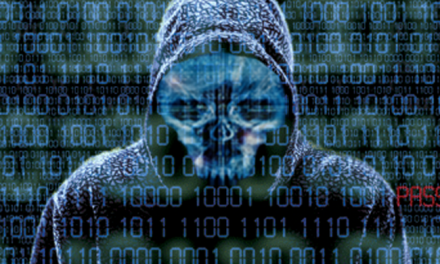